The Rock On, Lake Perry 50K, 1/2 Marathon and 5K was this weekend at the Branded B Ranch on Lake Perry. Put on by the Kansas City Trail Nerds. As with any Trail Nerd event, it is always top notch. And of course Dick Ross (www.seekcrun.com) was there taking FREE photos of all the runners. You know your at a great event when you see Dick Ross. Thanks for all the great photos Dick.
I had signed up for this race kind of last minute and was just going to go out and have some fun, and enjoy some time on the trails. I wanted to run a race without all the stress of trying to race. Something I've not had any success with in the past. And this race was no different. As the race got closer the more I realized that this, while it sounded good in my head, was probably not going to work out as planned. Something told me that when the gun went off, I would be racing. However, I didn't really taper for the race, so was just going to go out and see how I felt. My buddy Dave was running the 1/2 marathon and I lined up right beside him at the start. With a few pre-race instructions from Bad Ben (race director) we were off down a short road section to the

single track trails. I tucked in right behind Dave and we were in the lead right from the start. We put some distance on the rest of the field in the first 5 or 6 miles to the first aid station. No drawn out stop here just a re-fill of the bottle and a Nuun tablet plopped in and off again. Dave had decided to just tuck in with me and run the first loop as long as no other 1/2 marathoners got close. The pace was good and it felt like I was running on auto-pilot. We ran hard on all the flats and downhills and coast thru the rocky technical sections and uphills. It was just like a training run we bullshitted and just ran like normal. Maybe a little faster than a training run, but we were still chatting. The miles went by fast and soon we were only a couple miles from where he would cut off and finish. The last few miles together thru here were some nice flat and smooth sections and we chatted about how if someone was going to try and catch us they would do it thru here. So, we just kept the leg turnover going and picked up the pace thru here. Before long we were back at the road where Dave would peel off and finish, and I would run on thru for another 2+ miles of trail. I decided then to just keep running

with the same effort and intensity as I had been with Dave and see how long I could keep it up. I finished the first loop 15 miles in 1:50. After a re-fill of the water bottle, I was off on the 2nd loop. Much like the first loop I was running a little faster than I would have liked, but I was still feeling good, so I just went with it. I was really enjoying the run and the time on the trails. Really nothing eventful, just kept the effort consistent and ran. Soon I was back to the aid station and Dave was there with a fresh Nuun bottle and a couple gels and back down the trail. I kept thinking the wheels were going to come off anytime now, but I still felt surprisingly good. I just stayed focused and ran. The sections along the lake are some scenic views, to bad you can't tak

e your eye off the trails long enough to really take them in. It felt like I was getting stronger and stronger and I just went with the flow. My pace was gradually getting faster and faster the closer I got to the finish. I never really looked at my Garmin all day or obsessed about every split I just put the hammer down and ran. The last 6 miles I ran really hard and it felt good to be running that strong at the end of a 50K. When I got to the aid station at the bottom of the road, I knew I only had a couple mile loop and the finish. I blew right thru there pausing only to say hey to my good friend Jessica, who was working the aid station and cheering me on as I went thru. When I got back around Dave and John were there cheering me on. I remember Dave yelling at me "3:40 are you f'n kidding me" as I headed up the road/hill to the finish

. I was about ready to blow when I got to the top, the longest hill of the day is the one up to finish. And I crossed the finish line 3:43 and change. A great run for a 50K! No one was expecting me so soon and my wife and kid missed me finish. But the crowd that was there all came over to congratulate me. Bad Ben handed me my finisher metal a bag full of goodies, and the winners glass trophy. I couldn't believe I had just run a 3:43 50K and as Dave said "are you F'n kidding me." It was another great run and a great event, on the perfect day, with perfect weather and trail conditions. How could you ask for much more. This is why I love trail running even with a hard effort it just doesn't seem like work when you out there running in the woods in nature. Thanks to everyone, you all know who you are, my wife, son, the Kansas City Trail Nerds, Bad Ben, Sophia all the volunteers, my friends Dave, Jess and John for all your support and encouragement. And a special thanks to Dave for making that first loop fly by and keeping me company when he could of ran faster.
Posted by Darin at 4:40 PM 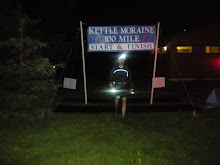 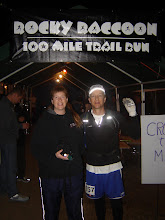 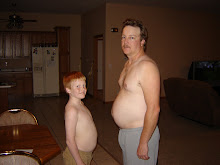 Darin
On October 31, 2006 I was 235lbs overweight and way out of shape. I decided to do something about it. I started watching what I ate,changed my diet, and walking to loose some weight. In 3 months I droped 30lbs. I started jogging and biking then playing basketball twice a week. I started running in May of 2007 and ran my first 5K in July of 2007. Every time I ran something I wanted to run farther. I ran my first 1/2 marathon in April 2008, and my first marathon in September of 2008. By this time I had lost 75lbs and started trail running after that and ran my first ultra, a 50K in October of 2008. I found a new love in trail running and wanted to run even farther and training harder and harder. In February of 2009 I ran my first 100 miler. I am currently running as many Ultras as I can, and really enjoy the training and time running on the trails and looking forward to much more.